When I joined HP in 2018, the layout and design direction for the latest iteration of HP JumpStart had already been established. I was tasked with completing the rest of the design work, which included: user flows, responsive strategy, visual content development, as well as all of the other design details. 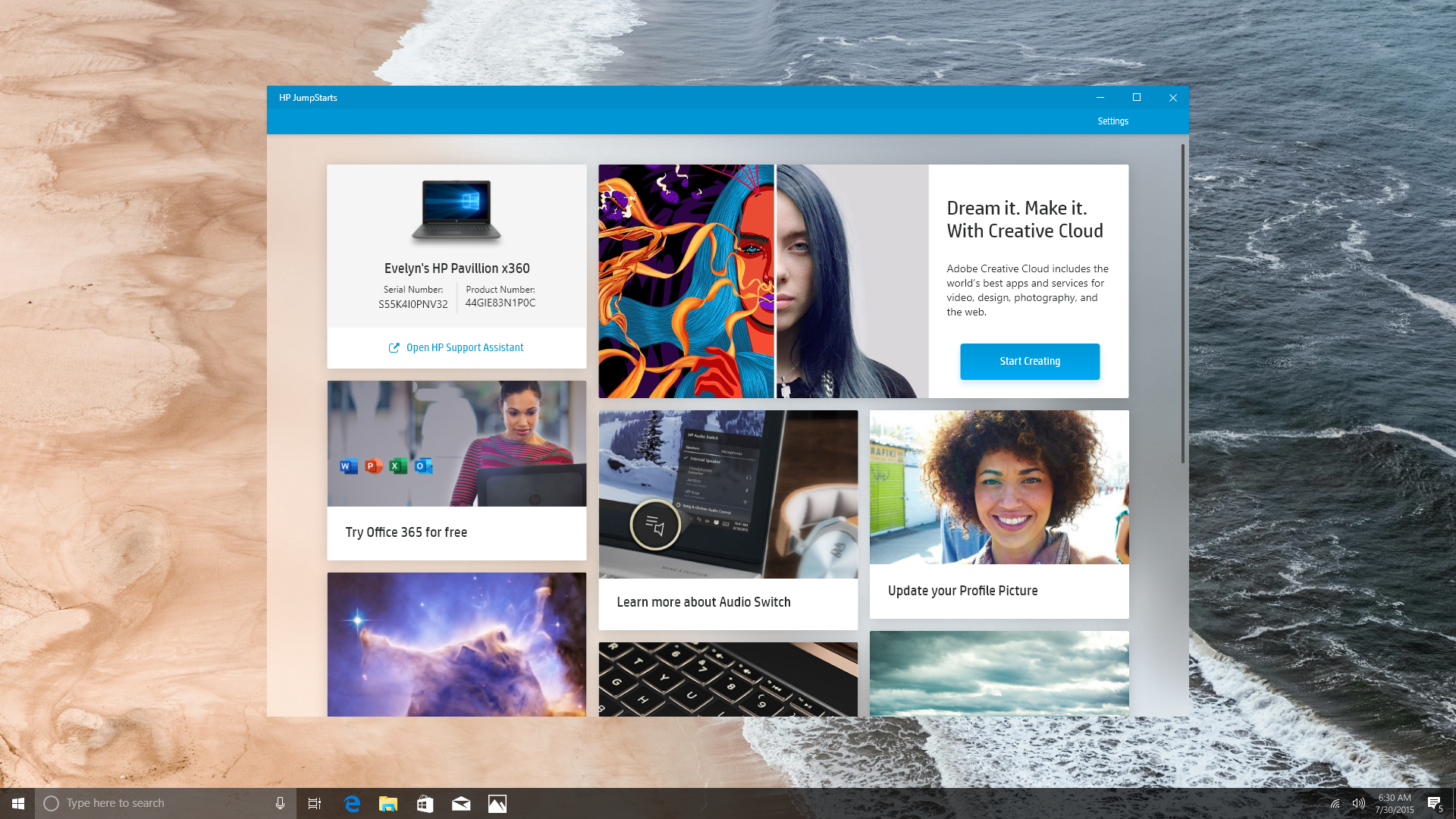 HP JumpStart is the software that greets every new HP device owner. It is a welcome app of sorts, where users are presented with tips and tricks on how to use their new device, in addition to special software offers that help them stay protected and get the most out of their purchase.

This software will be shipped on a multitude of devices, such ones with large 4k monitors, to smaller handheld touch screens. So we needed a responsive solution that could account for the unpredictable.

A primary goal of this software is to keep users engaged and returning to the application. It has to have a quick and painless onboarding experience, and present enticing offers in a way that captures users' attention.

This version of the software is also intended to kickstart the usage of a shared design system across HP softwares; an attempt to finally unify HP's software offerings and begin to build a stronger reputation.

As I am very accustomed to, I worked with a Product Manager to understand objectives and requirements, and the Engineering team to ensure that the intended user experience and design was built accurately.

As content is the core of this version of the product, I worked closely with a Content Development team. As content writers wrote articles, I worked with them to develop layout templates that served their needs, in addition to custom visuals and videos for each content piece they wrote.

As this is a product with an audience of 20 million globally, privacy becomes a very important topic. I worked with the Privacy team to ensure that we're appropriately giving users the power to control what data they share back to the company.

For the first time, I was lucky to work with a dedicated UX Researcher. I worked closely with our researcher to develop and design user tests, and advise on what areas to focus on.

I also worked with our third-party partners that were integrating their experiences into our product.

The groundwork had been laid; high-fidelity mocks had already been designed and agreed upon by the team. My job was to help turn these mocks into a real experience.

I first laid out user flows. Based on these flows, I developed clickable prototypes. For quick feedback, I created prototypes on InVision and posted them to UserTesting.com. This helped our team understand how users would use the product, what they expected out of the product, and their desire for a product like this. I also created a more interaction-rich prototype in Principle, which I would put in front of users in-person. We would occasionally test with colleagues around the office. Throughout the process we also hosted a couple of more formal user testing sessions, inviting users onsite to sit down and go through the prototype. These sessions were also an opportunity to understand their PC buying habits and their behaviors and expectations when setting up a new PC.

This was all happening in parallel to regularly checking in with the engineering team. This helped me to understand our limitations and trade-offs. The app was to be built in React Native for Windows, and wrapped in a UWP app so that it could be downloaded and updated from the Microsoft Store. React Native for Windows was still young and not as widely supported, so this presented challenges on design. Developing within this framework is not as intuitive as doing so on the web, and so much more detail needed to be provided on how components should behave, be built, and be interacted with. We had to make compromises on many of the finer details in interactions and animations, and building things out responsively was a larger effort than expected.

With assistance from our UX Researcher, we conducted a several tests on the product throughout the process. These tests ranged from quick prototypes posted on UserTesting.com to get feedback on the privacy choice selection portion of the product, to more robust sessions at research facilities that focused on registration and onboarding flows.